One Monkey Don’t Stop No Show!

Have you ever found yourself sitting at the bottom of “the hill” just as you were climbing to the top?

Have you ever hit “Rock Bottom” and considered giving up?

Well, consider that, if you happen to hit “Rock Bottom” – it could just be the best thing that ever happened to you. I have a new favorite song –

Life Is Wonderful by Jason Mraz is my new favorite song — a million years after the fact.

I have heard this song in the background of my daily routine before, but I never really stopped to let it in. Yesterday I saw Jason perform “Geek In the Pink”, which is my new second favorite song, and that’s how I came to pay attention to the Life Is Wonderful lyrics.

I really love that he considers the fact that you can’t have the good without the bad or the happy without the sad. These things go hand in hand, which is good news or bad news depending on which side of life you’re living on when you listen…

We Can, Because They Did 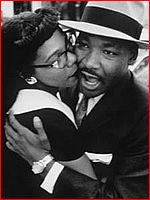 Today we mourn the passing of Coretta Scott King and pay tribute to a woman who was a living example of what it means to live life far beyond oneself.

We, the students of Spelman and Morehouse College, had the privilege of listening to Coretta Scott King often. She addressed the student body regularly.

I took that for granted. Many of us did.

Last night I was thinking about the kinds of things that you think about when someone who contributed to so many, dies. I thought –

because of what they had gone before us and done.

During the Civil Rights Movement, people put their lives on the line so that we could live — free. Young people like we were, risked their safety and well being for a cause that was bigger than their lifetime.

Later, people fought courageously, putting their lives on the line in protest of the Viet Nam war.

I know that I have taken courage and sacrifice for granted.

I wonder, as I observe the way that we live today — what we produce, what choices we make, what we are willing to turn our backs on –

I wonder about where that kind of selfless courage comes from. Are some people just born with it or is the flame just waiting to be ignited? In the space that is now left empty, I wonder who will emerge to fill those shoes and go beyond. I wonder about the legacy that we will leave behind.