How old are you?

Where are you from?

Where do you live?

What do you do for a living?

We program films made by African people and artists of African Diaspora. We showcase and try to distribute their work through a series of programs, which we produce year round. We try to get them as many opportunities into as many spaces as possible.

What is it like for you as a creative person living in this particular time?

I feel as if the whole world is up for grabs. Taking that into consideration, I feel Africa is evolving in a good way. The last forty years has been a turbulent time for Africa and her people. At this time we can only look up. My belief is that in 30 years Africa will be unrecognizable to people like us – in a good way.

For me it’s important, taking into consideration what I do and my stance as an African who is a product of another Africa that I know that no one has seen in the past forty years, to contribute in any way I can, especially through the arts.

I feel as though the arts are integral to the survival of mankind. I think when all else fails, culture is what will sustain human beings. Art gives us a sense of who we are and directs us and gives us our equilibrium. Africans have always lived and breathed art. We take it for granted and don’t even realize it.

I have a relative who works for the World Bank. He was in Mali a few years ago. He went there thinking, like everyone else, that Africa is a poor, arid country with no natural resources. “Then”, he said, “I woke up in the morning. There was someone playing music. Someone else was pounding the food that was going to become my breakfast. Someone else was finishing a batik tablecloth that would be used for dinner that evening because I was a special guest”. He thought “my goodness! This is life!”

There is richness to the lifestyle that we take for granted without realizing that this is what sustains our survival when all else fails.

I want to be at the helm of this change that is taking place. ...

What do you think will remain 100 Years from now? What will still be standing?

What will still be standing is what has always stood through time - relics that will remind us of what we have done and to what we have contributed to mankind.

What is happening in Sierra Leone right now is an effort to preserve Bunce Island. Bunce Island was a fort from which a lot of people departed to this part of the world…there are talks of trying to maintain this structure. There is this deconstruction that is taking place as well.

We are learning as a result about the people who went to the Sea Islands who came directly from Sierra Leone. They came as rice farmers. We are learning that they were the most expensive slaves on the block because they came with a trade. We are also finding out that pieces of their lifestyle have been kept in tact - the way they weave baskets, build the structures that they live in are still how people live in Sierra Leone and along the coast of West Africa now.

Those are the point of references that will always connect people and make you rediscover who you are. That is also what helps to trigger in people the desire to want to do something.

You cannot trivialize or overlook the fact that these structures or that these pieces of history are still standing and there is a reason why they are still here...

In 100 Years I hope that we as human beings would have come to some sort of level of consciousness where we realize that, despite the fact that we might not speak the same language or look the same way or occupy the same space, that we are all vested in maintaining some sort of harmony with nature. 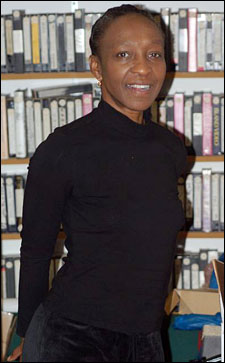 I hope people will respect each other more. There is a thread that connects us all. This is how the world began. Somehow that thread has been, um…I don’t want to say it has been broken but it has been...

This is more of an ego thing, but I hope that African films will continue to be made and be seen all over the world and that African artists will have that entitlement also to make films about, let’s say Mongolians if they want and not only make films about Africans...

That in my own little way, under the African Film Festival umbrella, I was part of a network or consortium that worked to keep our faces and voices relevant.


*All The 100 Years Project photos are taken by Dana Roc.