Where are you from:

Where do you live:

What do you do for a living:

I own a coffee company. I am Co-founder and Co-owner of Crop to Cup Coffee Company. We import coffee from farmers, we sell coffee to roasters and we also have a roasted brand that we sell to restaurants and cafes.

When you think about answering the question, “100 Years from now what do you want to be remembered for” what confronts you?

Most of my thoughts are about being good to our people whether that is our suppliers or our employees. We have a very small and selected staff of people that started working at flea markets for us and they found us because they liked what we were doing or we found them because we liked what they were doing. A lot of what we do is based on nurturing this family. We are all kind of pushing it along together. That includes our farmer community.

We are constantly trying to get enough cash and technology to get closer to the farmer side and to do more with them. In 100 years I would like to have built a model and a framework for coffee farmers in places like Uganda and other places where they need a lot of help, that caused a movement, that “plugged them in” in a positive way.

It’s not like we are trying to invent another wheel. It’s coffee. We’re just trying to find a better way...

Coffee for me has always been synonymous with gathering and conversation. It represents meaningful, thoughtful, indulgent conversation and ultimately community. So much of what you do is about community. I mean without that there would be no Crop to Cup would there?

Yeah. On all sides. It’s obvious that we are building our company around farmers. But also here in the café…The space here is more of a community space than like a business café. You can see it in the activities that we do here as well. We have planned an event that is about bringing people in that we have met along the way that have been friends of the company as we have been starting out.

What is the one thing that you think represents this time that we are living in right now?

I think you have heard this around quite a bit before. You hear it a lot in government or news spin and, maybe its just the community that we are in in Brooklyn and New York City where there are a lot of opportunities for people, but there are a lot of people out there doing it for themselves now.

Half of the world has been dumped from their bank jobs and people are just doing other stuff now. I meet people all of the time that are starting up their own foods companies or doing cutting edge murals on the sides of buildings in Harlem and it’s not just from the “I’m an artist” point of view. It’s about creating a livelihood.

There is easier access to more unique products now. Anybody can make their own beer now or start up their own paper company, etc., because anybody can get the information about how to do it.

So then what is the one thing that you thing is representative of this time that we are living in?

Fill in the blank, 100 Years from now I hope that:

100 Years from now I hope that there is not such a large disconnect between people around the world as suppliers and buyers, rich or poor...

I hope that travel becomes really cheap so that everybody has the ability to travel. I have been very fortunate to be able to travel…You need money to travel...

100 years from now I hope that impoverished people are not disconnected from the market or from the community and that they have access to opportunity through entrepreneurship.

It would be interesting to look at the access to capital which is pretty low right now and the level of entrepreneurship... 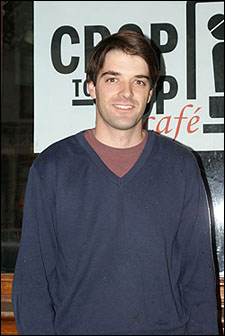 I think that people are having to try and hustle up ways to survive...

We want to work with farmers that are willing to get involved with new ways of doing things. How do we get them the tools that they need to do stuff? If we could just get communication and technology to everybody...

100 Years from now what do you want to be remembered for:

I want to be remembered for being somebody that helped people get connected to opportunities that helped them succeed...

*All The 100 Years Project photos are taken by Dana Roc.