You are here: Living Louder | From Dana's Guests | Action Against Hunger

While dining at a restaurant recently, Auguste and Gussie and I noticed the card that came with our menu. The card was an invitation to us to give one dollar at the end of our meal that someone else might eat...

Madeleine came to us on the 15th of July, 5 days after we opened the Therapeutic Feeding Center. A 12-year old girl, 30 lbs, 3 and a half feet tall. No longer able to walk, to sit, to stretch her arms or legs, to talk, to eat or drink anything, to play, to be a child. Cutaneous lesions all over her body, her skin looking burned, edema (pockets of water under skin) on both feet, no more hair, apathetic, no more strength in that little body of hers. "Mado" was severely malnourished.

It was the worst case I had seen so far, but this was my first mission and the TFC had just opened 5 days before, so I wasn't used to a lot. So my first thoughts were: "We will lose her; it's not possible that she can survive." But Claude, our assistant medical-nutrition coordinator, was more optimistic and assured me that we could save her. It would take time, but it was possible.

So we started our treatment, adapted to Mado's nutritional and medical state: therapeutic milk in the first two phases, and in the last phase therapeutic milk and solid food to get used to the food at home. The medical treatment included antibiotics, anti-malaria treatment, vitamin A, iron, and anti-worm treatment (this is a treatment that everyone admitted in the TFC receives). For Madeleine we also prescribed a treatment for her skin. The nurses applied gentian violet, which has an antiseptic and disinfectant effect and made her our purple girl.

The beginning was difficult. She was lying on her mat, covered by her blanket. Crying every time someone tried to touch her or tried to take the blanket away because she couldn't bear the light. Feeding her the therapeutic milk was a real struggle. It was drop by drop that she was fed. But we didn't have to place a naso-gastric tube.

After 5 days her edemas were gone and she was transferred to the second phase of the treatment, the transition phase. She still couldn't sit or stand up but we saw a change in her condition. She was less apathetic, it was much easier to feed her, and you could touch her without her crying. She even started to ask for real food, particularly rice, because she didn't like the milk. So Michee, the assistant nutritionist, made a deal with her. She could have real food as soon as she could stand up and walk.

And then one morning I arrived in the center and the whole team was almost in 7th heaven. Mado was able to sit and she was even trying to stand up! But because she was still in the second phase, we couldn't give her solid food. But we told her all how proud we were of her and that she had to wait a little more before she could have rice. Her weight was going up and down: 34 lbs, 31.5 lbs, 33 lbs, 34 lbs, 35.5 lbs. And then she started to gain weight and didn't lose another pound until the end of her stay at the center. 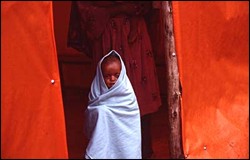 More than a quarter century of international humanitarian action...

Recognized worldwide as a leader in the fight against hunger, Action Against Hunger delivers programs in more than 40 countries, specializing in emergency situations of war, conflict, and natural disasters and longer-term assistance to people in distress. Our ultimate goal is to help vulnerable populations regain their self-sufficiency for long term sustainability.

Her medical condition was also improving, her skin was recovering, she started to talk a lot, to search for contact with other children. Once I came in the ward where Madeleine was staying and she wasn't there. I was told that her mother took her out for a shower. So I went to see them. And like a miracle, Mado came back from the shower but not on her mother's back... No, she was walking, all by herself, with no help from anyone. That was an emotional moment for everyone.

After 17 days in the second phase, Madeleine went on to the third phase, where she stayed for 13 days. And she got her rice. She loved the food we were giving her. She played with the other children, walked around in the center and decided that she would marry a "muzungu" -- foreigner -- when she grew up. Even Justin, the TFC supervisor, couldn't change her mind by saying she could marry him when she was old enough.

I had the impression she was very thankful. Once I came back after an absence of a few days and she jumped in my arms and we hugged each other for almost 5 minutes.

It was not always easy for Madeleine during her stay. She had malaria, she had an abscess on her right ear that we had to remove, she had to learn to walk again, but she survived.

Madeleine left on August 21st, 38 days after she was admitted in the center. A 12-year-old girl, 46.2 lbs, 3 and a half feet tall. Able to walk again, to sit, to stretch her arms and legs, to talk, to eat, to drink, to play, to be a child, her skin cured, no more edemas, her hair growing again. Strong again, ready to go on with her life, because she was no longer severely malnourished. And all this thanks to the people who believed in it, Claude, Michee, Justin and the whole team working in the TFC.

Click the above image to make a one-time gift to Action Against Hunger.

For more additional information on how to give and support Action Against Hunger, click here.