You are here: Living Louder | From Dana's Guests | Majora Carter

Majora Carter received a B.A. (1988) from Wesleyan University and an M.F.A. (1997) from New York University. She served as project director (1997-98) and associate director of community development (1998-2001) for The Point Community Development Corporation, working on youth development and community revitalization in Hunts Point. She founded Sustainable South Bronx in 2001 and serves as its executive director.

Majora Carter claims the South Bronx as her home and she is determined to make her community more livable, greener, and healthier than it is today. The founder and director of Sustainable South Bronx (SSB), Carter is a relentless and charismatic urban strategist who seeks to address the disproportionate environmental and public health burdens experienced by residents of the South Bronx. Working in partnership with local government, businesses, and neighborhood organizations, she creates new opportunities for transportation, fitness and recreation, nutrition, and economic development. Returning to her native Hunts Point section of the South Bronx after completing an MFA, Carter first sought to deepen the emphasis on the arts in the South Bronx. It wasn't long, however, before she was engaged in battle over New York City's plan for a solid waste management plant to process 40 percent of the city's garbage at a facility on the Hunts Point waterfront. Successfully diverting this plan, SSB and other groups envisioned a new relationship with the Bronx River and embarked on projects that built a park on the site of a former concrete plant, enabled public waterfront access where the shore was once littered with industrial scrap, developed an ecological restoration workforce to protect and maintain the natural environment, and raised funds to conduct a feasibility study for the establishment of a bike/pedestrian greenway along the waterfront. Making the connection between green space and health, Carter added a community education focus to the work of the SSB around fitness, food choices, and air quality. As part of this effort, she established a community market and introduced green roof technology.


"I have to admit up front", she said as we settled into our conversation. "I have to admit that I am not feeling very inspiring this morning." So I, as if on cue, jump right in to "save the day". "Hey, that's OK. Do any of us ever really wake up feeling inspired?" "I do.", she immediately replied. "I wake up feeling inspired just about everyday." "Hey! Wait just a minute!" I thought. "She just stole my line!"

The fact of the matter is, although she may not have been feeling inspired, inspiring is what she was.

I already admired Majora Carter, even before we talked because of the articles that I had read about her and the great work that she is doing in her community. But it was her strong sense of self and self purpose, her fearless pioneering spirit that left me uplifted and feeling a little bit more self empowered myself, long after we were finished talking.

as told to Dana Roc

I started Sustainable South Bronx in 2001 to serve as a direct response to the issues and the degradation that the South Bronx community had been dealing with for twenty years or so. I wanted it to be something that would create the kind of vision that the South Bronx community, thru various visioning and community planning workshops, had decided that they wanted. Things like waterfront development and open space and parks. Things like opportunities for living wage jobs that actually don't degrade the environment, the right to clean air and access to various transportation systems that actually allow people to live a little more humanely.

Some of the projects that we have been working on since the beginning are the South Bronx Greenway, the dedicated waterfront esplanade as well as dedicated on street bike paths and walking paths that allow people opportunities for physical activity as well as ways to meet their neighbors and participate in community building.

We also work on a green work installation project which is, that we look for sustainable development models around the world. The green roof, all it is very simply is living plants on a roof and they have tremendous benefits such as proving a layer of insulation so it protects your roof from the effects of the sun. The insulation layer also keeps your building cooler in the summer and warmer in the winter. It also attracts storm water that doesn't have to be treated by our sewage treatment system which is usually located in poor communities of color.

They are green, living plants that help filter the air. They've got air cleansing capabilities and our goal is to see them all over New York City and in other urban areas as well.

We also run an ecological restoration job training program, BEST. BEST stands for Bronx Environmental Stewardship Training and that trains young and not so young people, with the skills of ecological restoration. We also train them in "soft" skills like resume writing development and management, time management, financial management as well but the bulk of the program is specifically focused around ecological restoration from landscaping to tree pruning. These jobs are really important and these are big growth industries and we want to make sure that there are people in our communities who can access these opportunities as well. 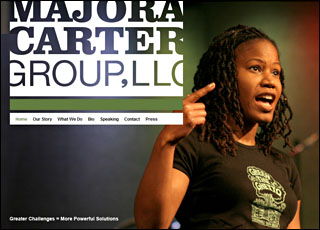 In the late 1990's Majora Carter took a bold step into the world of urban planning - simultaneously working to shift a Giuliani administration plan from additional waste handling for the South Bronx to positive green development, while scoring a $1.25M Federal Transportation planning grant to design the South Bronx Greenway. This 11 mile network of bike and pedestrian paths connects neighbohoods to the river front and each other with low impact storm water management features, local entrepreneurship opportunities that economically encourage active living and reduce traffic congestion.

She went on to spearhead the first South Bronx waterfront park in over 60 years (see image left), and in the process Majora amassed a beautiful collection of strange bedfellows from policy makers to business leaders and community members that made those projects happen. While this project is an important and very visible accomplishment, it was only a part of a larger strategy to move under-performing communities into a healthy and productive economic condition.

With a focus on goals over ideology, Majora Carter then built one of the nation's first and most successful urban green-collar job training and placement systems by 2003. Moving on from Sustainable South Bronx, Majora Carter brings the value of this type of leadership & talent to bridge the gaps between clients and the interests we all want served. Majora Carter Group, LLC can help clients connect the value of governm goalsent, business & industry and community. We want to use our integrity and abilities to bring disparate parties together to help break the impasse between sustainability goals and entrenched inter-stakeholder distrust with buy-in from all parties, by creating an environment where all dreams can thrive.

I didn't grow up as an activist or anything like that. I started this work when I was a little bit older. I really didn't start getting into it until I was in my thirties so I came to this work with a sense of pragmatism.

I live for the possibilities!

I see what is possible and I think "OK. How can I create something where nothing existed before?" And, I am not easily discouraged. There are always twenty different ways to do things and you just have to figure out ways to continue.

I like to hear about people's magic moments, the exact time when they went from where they were to where they were destined to be. Was there a precise moment that she had when it became clear for her that this was what she was going to do; when it dawned on her that she had to take a stand and do something? I wondered, so I asked and she said:

I moved back to my parent's house in 1995 and I had no intention of being a part of this neighborhood. And, for two years I wasn't. I would literally just come and sleep in my room at the house and then go to Manhattan. But the interesting thing was is that I got to know a group of folks that were doing some arts work and I thought that was fascinating and I couldn't believe it was happening just a few blocks from my house.

It was around that same time I started to get "politicized" about what was going on in the neighborhood and the fact that the community had been pretty much created to accept all of this waste and eventually to make the people that here feel as if they were a fairly worthless lot mostly because of the physical environment that was being pushed on them. I realized "Wait a second. Communities don't become this way because people just don't care. They were regulated into this." Then I thought "That really sucks..." and it just became, for me, a cause for alarm. Here I was doing arts related work and it just did not seem - not to say that I don't love the arts but I just felt like I couldn't, unless I was actively using the arts, sort of be in support of the people...

"This is a problem and I want to do something about it."

My own activism grew out of the fact that -

I knew that I could help create alternatives to the traditional modes of thinking that ruled this community. Instead of thinking of the Bronx as the place where garbage goes, why not create waterfront parks? Instead of thinking about the fact that most of our young men and young women, to some extent have to deal with the other side of the criminal justice system, how about we come up with job opportunities that will allow them to think beyond the traditional thinking?

You can give fish to men or you can teach a man to fish...One keeps people small while the other supports people and empowers them to -

This is already her legacy.

These are community led and community inspired visions for our own community. This wasn't just some "top down" approach. But these were the kind of things that are of the community, therefore should be respected by the community and by everyone else looking at them.

The thing that most proud of is raising the profile of environmental justice and community led, initiated development as a systematic way to support the community and we are trying to build bridges to other social justice groups and support other sustainable visions.

A few years down the line a lot of this probably won't even be associated with me but that is good to know because it will mean that the people claimed it as their own. For that I am excited.

Those moments, the quiet ones at the end of the day when we can finally seize the opportunity to reconcile ourselves back to ourselves; when its just you with yourself and you have a chance to reflect, what inspires?

That I work as hard as I do for something other than myself.

I came back home.

Sustainable South Bronx needs you! SSBâ€™s work is challenging and exciting, but we need your support to help us continue to advocate for sustainable development in the South Bronx. If you are concerned about air quality in overburdened communities; if you think all children should grow up with places to play and without asthma; if you want to see environmental justice for the South Bronx and New York City, please consider donating to SSB. Every bit helps, and your donation to Sustainable South Bronx will make a difference.

Or if you wish to mail your contribution, please make your check out to:

Your support is greatly appreciated!