Sometimes you just "have to go there". Sometimes you can't afford to be nice. Because sometimes what is at stake is whether or not someone will live or die.

I believe that there are times when you have to be willing to say what you think and say it very loud. For me, the immediate events surrounding Hurricane Katrina and her aftermath was something that needed shouting about and so I shouted pretty loud and for more than a few days.

I can remember a lecture tour that Gussie and I attended at a museum and during the question and answer period someone made a comment criticizing the people that were "looting" in New Orleans, the implication being that they were innately criminal just doing what criminals do. I interrupted her to suggest that maybe they were trying to get food and water for their kids. I mean where was the compassion?

We live in a society that teases and taunts people to want more and more; in a system that convinces us that in order to be truly happy and accepted you have to have certain things. Only everybody is not invited to play and nobody wants to take responsibility for the consequences of the teasing and the taunting and the convincing.

The willingness to stand in someone else's shoes long enough to appreciate where they are coming from is where true compassion and understanding can begin. I keep learning this lesson over and over again. Each time I do, I expand my capacity to "see" another human being as a real person with a beating heart and profound concerns and dreams that are not so different from mine.

The media's noise machine over simplifies and distorts our important and shared issues, dictating to us what we should care about and how we should think. But it doesn't have to be that way.

"...a media culture that sensationalizes the trivial and trivializes the profound - in a 24-hour news network bonanza that never fails to keep us posted on how many days Paris Hilton will spend in jail but often fails to update us on the continuing genocide in Darfur or the recovery effort in New Orleans or the poverty that plagues too many American streets.

And as we're fed this steady diet of cynicism, it's easy to start buying into it and put off hard decisions. We become tempted to turn inward, suspicious that change is really possible, doubtful that one person really can make a difference."

What would it be like if we consistently provided people with good solid information that invited inquiry and encouraged conversation so that people had the opportunity to keep arriving at their own healthy conclusions? Would that change the way we live for the better?

A lot of the Katrina victims still don't have a place to call home. When we've got the means and the opportunity to continue to raise awareness through the power of the media, this is hardly an acceptable condition.

It’s 5:30am. We spent an anxious night watching The Weather Channel. We packed our cooler and two days’ worth of clothes yesterday. We’ve got the checkbooks and insurance papers (just in case), flashlights, batteries, our cell phones and laptops. We’re good to go.

7:00am – We had planned to be on the road by 6:30, but Marian Martin (the executive director of Gulfside Assembly, located right on the coast) needed my husband to help her put the last two pieces of plywood on her windows and lock up and check the buildings.

It’s a beautiful day on the coast. You’d never know there was a storm out in the gulf.

Finally, Mrs. Martin and her two dogs (Keisha and Lucky) are ready to go. We’re going to Hattiesburg, about 90 miles north. The news reports say that even Hattiesburg will get tropical storm force winds and damage, but we have to go somewhere. Jackson is even further north and expected to get the wind as well, so it really doesn’t matter how far you go. This storm is gonna be big . . . and bad.

12noon – We made it to Hattiesburg. We didn’t have a reservation anywhere and were lucky to find a hotel with a room. We originally only had a room for one night, but when my husband was bringing up the last of our things he was met by a man who remembered that Ed was looking to extend our stay through Monday. This man was going further north, canceling his room reservation, and offered it to my husband. Serendipity. We now have a room for Sunday and Monday. We have supplies for several days. I am typing my weekly reflection paper for week 3 of my online class. It has to be posted by 10pm. Ed is watching a movie on WTBS, Tap with Gregory Hines. We’ll just chill out and try to relax. Everything is normal. Everything will be okay.

11:00am – The electricity goes out. I didn’t have a chance to call my mom again. 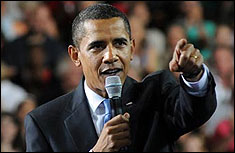 Hello, New Orleans! It is great to be back in the Crescent City. And it is always an inspiration to spend time with the men and women who have reminded the rest of us what it means to persevere in the face of tragedy and rebuild in the face of ruin. Katrina may have swept through this city, but it did not destroy this community, and that is because of you - the people of New Orleans.

It has now been just over four years since that terrible storm struck your shores. And in the days after it did, this nation and all the world bore witness to the fact that the damage from Katrina was not just caused by a disaster of nature, but by a failure of government - a government that wasn't adequately prepared and didn't adequately respond.

I saw the consequences of this failure during my visits here as a Senator and then as a candidate. So when I took office as President, one of the first things I did was tell my Cabinet and senior staff that our Gulf Coast rebuilding efforts and our disaster response efforts were going to be top priorities for this White House. I wanted to get it right and I wanted us to be ready.

The wind speed is more than 100 miles. Ed keeps looking out of the window watching the Burger King next to the hotel get ripped apart. I keep telling him to be careful. (He’s driving me crazy doing that.) I start reading the book for this week’s assignment. I get up to chapter three by nightfall. We have a windup radio, so we can keep track of what’s going on. It’s not good. Not good at all. We try to sleep around 8:00pm., but the couple in the room next to us is arguing. They’ve got children, they’re anxious, scared, and on edge (as we all are). The wife is asking the husband “what are we gonna do, what do I tell the kids, we don’t have enough money. . . .” The husband all but explodes. I feel like banging on the wall and telling them to just shut up. I somewhat sleepily ask my husband if he thought it would be okay if I went and threw my shoes at them. He said no and to go back to sleep. Sleep?! Yeah, okay. Whatever.

It’s a beautiful day. The calm after the storm, I guess. We have no cell phone service, and I’m about to go insane because I can’t call my mom. I know she knows what we’ve already heard: New Orleans is under water, and the gulf coast has been obliterated.

The phones are out, the power is out, and we have to get out of the hotel. Some people left late last night after Katrina blew through. How they made it in the dark, with no traffic lights, I’ll never know. Other folks left this morning. We were going to try to stay one more night, but there is no water. No water means no flushing, and no flushing means . . . well, you know what that means. We decide to try and find Marian. She’s staying with a friend (Ora Franklin) who told us we could stay with her if we needed to. We decide to find a payphone and call Ora for directions to her house. No sooner do we enter the hallway (headed out to find a phone) when we see Marian at the opposite end of the hall. Serendipity. She has come looking for us just as we were coming to look for her. We go outside, meet Ora, decide to take her up on her offer, and follow her to her house. She has a battery powered tv AND cell phone service! Thank you God!

We stay at Ora’s a short while. I ask her to try to reach my mom. She says she will, and she’ll have a neighbor try as well. We go back to the hotel, load the car, and check out. It takes two trips because we are on the second floor.

By the time we get back to Ora’s house, she’s reached my mom!!! I feel better now.

I tried to reach her using Ora’s cell phone, but I can’t get through. I’ll try again later.

The early estimates are that we will have electricity here in Hattiesburg in 3, maybe 4 weeks. It’s midmorning. We need some supplies. We’re driving and find The Home Depot open. There’s a line a mile long. We stop anyway. Ed, Ora, and I get in line.

Mrs. Martin sits on a bench. I started getting lightheaded after standing in the sun for nearly an hour. I sat with Marian for a while, 20 or 30 minutes perhaps. I go to get back in line, and immediately begin to feel like I am going to pass out, hyperventilate, or vomit. I really don’t feel stressed, but my body obviously disagrees. I went back to where Mrs. Martin was sitting, sat down, put my head down, and forced myself to breathe.

Some three hours after arriving, we all leave Home Depot. We’ve got batteries, touch lights, and other stuff. I FINALLY talk to my mom!! I give her phone numbers for my instructor so she can tell him I’m alive, but unable to complete my work for this week. She starts crying. I have to cut the call short because I know if I start crying now I might not stop, ever. At least she knows we’re okay. We eat, we plan the next day, and we try to sleep. We have a clean place to stay, food, water, ice, and our lives. But, do we still have a house?