Stan Brock is the founder of the non-profit medical care organization, Remote Area Medical. RAM operations are dependent on the work of thousands of volunteer medical professionals and the small donations of many supporters, it receives no state financial support. Up to December 2009 there have been over 400,000 patient encounters. Medical care is provided entirely free of charge to patients on a 'first come, first served' basis. Most treatments are in the form of eye care, dental care and general medical examinations. RAM veterinary care extends to companion animals. Operations are mainly confined to Tennessee; so far the only State in the Union permitting medical professionals from other States to work on a temporary volunteer basis. However there are ongoing operations in Guyana and ad hoc responses in disaster stricken areas like Haiti (2010).

Stan Brock is someone that I consider to be an angel on this earth. His work with Remote Area Medical is profoundly important, providing medical treatment in communities around the world where need is great. According to a report in The Independent (UK) he:

"...has no money, no income, and no bank account. He spends 365 days a year at the charity events, sleeping on a small rolled-up mat on the floor and living on a diet made up entirely of porridge and fresh fruit."


THOUGHT FOR THE DAY:
by Stan Brock 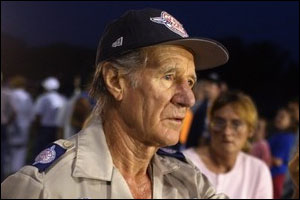 DR: Tell me about your life and your work.

SB: What is most relevant for this program right now, Dana, is to replicate it throughout the United States because we have a mandate from the American public apparently, with huge quantities of mail coming here from concerned citizens, about the health care crisis in the United States.

Up until a few months ago when 60 Minutes and CBS happened to do a profile of Remote Area Medical's work in this country, the only people who really knew who we were, were the poor. Now the general public knows about us in large numbers. Also the foreign public knows about us now because 60 Minutes plays in a lot of foreign countries. I met somebody yesterday who had been in a hotel in one of the Baltic States and saw us on 60 Minutes.

The problem is, that as long as I have been in this country, which is a long time, people have not been able to afford health care unless they are either very well to do financially, or very well insured. Here we are in the richest country in the world, listed as number thirty seven out of one hundred and ninety countries, by the World Health Organization, in terms of our ability to provide care for our citizens. The system here is a privilege of the well to do and the very well insured. Most people seem to sort of fall outside of that economic block.

We have seen an increase in the number of patients that we are seeing...

Having grown up in England in the war-torn years of the 1930s and 40s I have seen many of the discoveries that have changed the world, some good, some bad. Airplanes are good, but the bombs they can drop are bad. One good thing has a tendency to produce an opposite result. Religion, for example is a good thing, because in whatever form it takes it generates altruism and compassion in people. Unfortunately at times it produces a counter effect, the kind that causes religious fanatics in Pakistan to murder health care workers delivering polio vaccine to little children. Polio vaccine was one of the good discoveries of the 20th century, religious fanaticism was not.

The discovery of photography in the 19th century was a good thing. It documented historic occurrences with accuracy and led to newsreels with sound and film in the 20th century. Between enemy bombing raids in the 1940s I used to hide in the cinema so that I could watch the double feature again without having to pay. Movies made a great impression on my developing mind. Cowboy movies were my favorite; Hopalong Cassidy, the man in black with the pearl handled guns. How I dreamed of having a pair of pearl handled guns. Shootouts were the best, but nobody ever seemed to get seriously hurt. They shot at each other from behind rocks, bullets zinged off boulders and eventually the bad guy was shot in the shoulder. There was never any blood and he was led off to jail while the hero on the white horse rode off into the sunset.

Hopalong Cassidy was my hero. His exploits on film changed my life as a 12 year old. So inspiring was his influence that I ran away from school a few years later to South America and became a cowboy, with a white horse, and yes, a pair of pearl handled guns riding the range on the Brazilian frontier. There were plenty of bad guys on the border in those days. We had a few stand offs and bar room brawls, but I never got to shoot anybody, not even in the shoulder.

You can probably still find Hopalong Cassidy today on some late night channel at one o'clock in the morning. But some 12 year old kids are not watching Hopalong Cassidy. They are holed up in their rooms, entranced, influenced and brain washed by mindless mayhem, with guns and swords cutting people apart with bloody heads and limbs flying across the screen. Yes, the discovery of film was a good thing and a bad thing.

We may not be able to control over 200 million guns in the hands of the American public. But perhaps we can control the level of violence on film and video games. Was it that influence which caused Adam Lanza to perpetrate the massacre at Sandy Hook Elementary School on December 14th at 9:30 AM? That was not a video game.

Stan Brock is the founder of Remote Area Medical (RAM), a charity based in Knoxville TN, providing free medical and veterinary care for the underserved here in the US and abroad. He was the former co-host of the popular television series "Wild Kingdom". His book "All the Cowboys were Indians" describes his life as a cowboy on the Brazil border of British Guiana in the 1950s and 60s. www.ramusa.org