You are here: Living Louder | From Dana's Guests | StoryCorps, Listening is the Greatest Gift

StoryCorps, Listening is the Greatest Gift 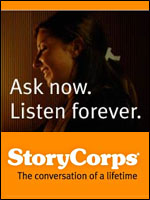 StoryCorps is on a mission to provide people with the opportunity to give the gift of listening. Join them on November 28th for their National Day of Listening and discover that listening can actually be a precious gift that we can each give ourselves as well.

"If you had 40 minutes to leave a legacy, what would you talk about?"
That's the big question Storycorps founder Dave Isay asked the audience during his speech at Clowes Memorial Hall Monday.

Storycorps encourages people to engage with those they care about by interviewing them about their lives. To facilitate this, Storycorps was founded five years ago with one booth in New York City's Grand Central Terminal. The project has expanded to included booths that travel around the country gathering the stories of everyday Americans.

Backed by National Public Radio (NPR), the project has produced one book, and two more are in the works. NPR plays excerpts of one recording on its show every Friday morning.

People make reservations with a booth, bring their parents, children, brothers, teachers, mentors, or complete strangers to talk, and then leave after 40 minutes with a recording of their interview. A second copy of the recording is stored in the Library of Congress.

"Storycorps is about the experience in the booth," Isay said. "It's a crazy experiment. The stories just seem to get better."

Isay said the importance of archiving is to preserve the bridges between generations that are formed during the interviews.

"I think the archive will be very valuable." Isay said.

Isay began the project while working in radio production after graduating from college. He conducted an experiment in March of 1993, in which he gave tape recorders to two 13-year-old kids from the south side of Chicago. The result was a 30-minute audio documentary called "Ghetto 101," which narrates the lives of LeAlan Jones and Lloyd Newman as they went about daily life and interviews their family members about their hardships.

More than 15 years later, the boys are now approaching 30, and many of the other people they heard on the tapes have passed away. The recordings are the only links Jones and Newman have to the people in their past, Isay said.

"The microphone gave them a license to ask questions they had never asked before," Isay said. "The inspiration for Storycorps came from this documentary." 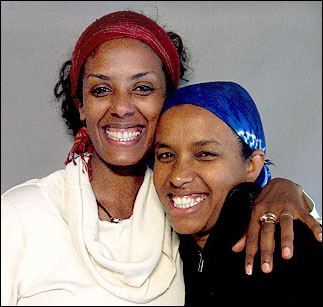 This Thanksgiving, StoryCorps asks you to start a new holiday tradition—set aside one hour on Friday, November 28th, to record a conversation with someone important to you. You can interview anyone you choose: an older relative, a friend, a teacher, or a familiar face from the neighborhood.

You can preserve the interview using recording equipment readily available in most homes, such as tape recorders, computers, video cameras or a pen and paper. Our free Do-It-Yourself Guide is easy to use and will prepare you and your interview partner to record a memorable conversation, no matter which method of recording you prefer.

We hope that you’ll make a yearly tradition of listening to and preserving a loved one’s story. The stories you collect will surely become treasured keepsakes, growing more valuable with each passing generation.

Isay and his team put together a book of excerpts from a collection of stories recorded in the booths. The book, "Listening is an Act of Love," was used as the Welcome Week book at Butler.

Isay said Butler is the first college to use his book, putting the university at "the nucleus of the revolution," as he hopes to expand the project across the country and possibly internationally.

From striking sanitation workers who marched with Dr. Martin Luther King Jr., to compassionate bus drivers and daughters trying to connect with their fathers, Isay's book tells the stories of everyday Americans.

"These are the real American heroes," Isay said. "Not that other crap on MTV."

Throughout his speech, Isay took questions from the audience and played several audio recordings from "Ghetto 101" as well as Storycorps. Some were in the book and others were not.

He told a story about an elderly man who brought several people into the booths and interviewed his wife several times, the last time right before he passed away from cancer.

Isay expressed his relief that, during five years, they have not had anyone try to turn the booth into a music recording studio or a place to camp in relief of the streets.

Since it costs the studio $250 to record each interview, they are forced to operate on donations and grants.

However, Isay said his project is important because of its ability to change people forever.

Isay talked about his love for history, but not the kind one would find in a textbook. These recordings are what people will investigate later to find out about American history, Isay said.

In the effort to preserve history, Isay and his staff are launching projects to record stories from people affected by major events in American history.

In 2005 they began an initiative to record at least one story about every person who was killed in the terrorist attacks on Sept. 11, 2001. The stories will be archived at the National September 11 Memorial and Museum as well as the Library of Congress.

StoryCorps' newest initiative is a National Day of Listening that will start after Thanksgiving of this year.

"Asking a loved one about their lives is a profound act," Isay said. "There's poetry in the lives of everyday people. You just have to take the time to listen." 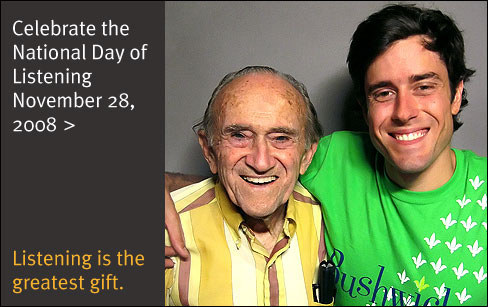 StoryCorps is an independent nonprofit project whose mission is to honor and celebrate one another’s lives through listening.

By recording the stories of our lives with the people we care about, we experience our history, hopes, and humanity. Since 2003, tens of thousands of everyday people have interviewed family and friends through StoryCorps. Each conversation is recorded on a free CD to take home and share, and is archived for generations to come at the Library of Congress. Millions listen to our award-winning broadcasts on public radio and the Internet. StoryCorps is one of the largest oral history projects of its kind, creating a growing portrait of who we really are as Americans.