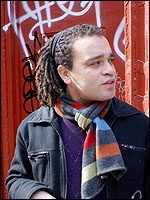 "As far back as i can remember I've always enjoyed drawing, doodling, and creating images for myself, family and friends. As I got older I saw how my work evolved and with the coaxing of friends decided to be more serious about actually showing it to a broader audience. I have no formal training in any technique or style. Through inspiration, that comes from all around me, I simply express what I see and feel using whichever medium feels right to me. I'd prefer not to say too much about who I am and rather allow you to have a more unbiased opinion of my work."

Gai is from Holland, was born in the islands of Cape and currently lives in Brooklyn New York.


Gai DePina is an emerging artist whose gift lies in his ability to freely express himself through his art and whose charm originates from within his genuine sense of modesty. A self proclaimed “citizen of the world”, Gai DePina is someone to keep on eye on...

DR: Tell me about your life.

GDP: I find it hard to talk about myself. I don't think that my life is so important that it should be relevant to anyone else. A lot of what I do is an interpretation of who I have been and what I have been through but, to actually talk about myself is kind of difficult but ask away...

DR: Well, what would you say is most relevant about your life right now?

GDP: I just came back from visiting my family overseas so the idea of travel and meeting people is most relevant right now. Some people think that traveling from city to city can be hard but I learned so much as a kid from traveling.

Americans are really censored compared to people in other parts of the world. I feel very fortunate to have my eyes open to other people and what other people are thinking. That has helped to mold me into who I am.

I remember as a kid, moving to this predominantly white suburb. I was one of the first "dark people" to live there. That is where I learned that people's color does make a difference. I was used to living in neighborhoods with Cambodians, Blacks, Whites, Chinese, everything and everybody and all the kids used to hang out together. We were just happy together. Then I come into this suburb and people are using this word "nigger". I honestly didn't know the meaning of the word. I didn't do to well in that neighborhood for the first few years. It wasn't a good time.

I realize how fortunate I was growing up that I wasn't exposed to racism until later. I think that all of the bullshit of racism is really taught. If you just leave a child to really experience people and cultures, let them visit other people's families and share other people's food, they would experience the kind of richness that I experienced that comes without hatred and division.

DR: And who are you today?

DR: Okay -- so what is it that inspires you?

GDP: You know The Empire Strikes Back? This is so pathetic but, alright. Remember Yoda?

DR: See, I'm gonna just have to take your word for it because I have never seen any of the Star Wars movies.

GDP: Okay, this interview is over. What?!! Have you not even seen…

DR: No I never…Should I rent them?

GDP: But, don't worry about it. For now we'll just let it slide.

What Yoda says when he is training young Luke Skywalker after Luke asks "What is the force", is:

"The force is everywhere".

Inspiration is like that. It is just everywhere. It can be in the music you listen to or the books you read. I'm on the train and there is all this splotchy dirt and shit on the floor and I am looking at it for inspiration. I see things. I look at people and I see things that shoot ideas into my head -- the park in the winter time or coffee - it's all awesome.

DR: What breaks your heart then?

Gai DePina Exhibits with the Association of African Canadian Artists 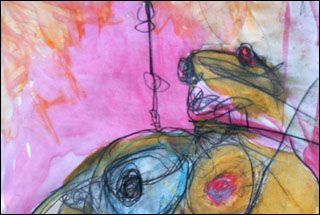 Gai will be exhibiting at the Association of African Canadian Artists Annual Art Exhibition that explores issues and form a uniquely Canadian perspective. It is a traveling exhibition that kicked off during Black History Month and is showcased in public spaces throughout Toronto.

I am not a fighter although I believe that you have to fight for certain things. When I look at some of the war and shit going on - seriously. I mean, I am all about America. It has given me everything I have ever wanted but at the same time no country owns me. I am a child of the world.

I can't handle injustice. Injustice really makes me sad. With all of our potential we blind ourselves with religion and politics and I understand why all of that is necessary but religion and politics often lead to injustice. The "powers" grab whatever they can to control and to warp and to gather whatever finances they can for themselves and leave nothing for the rest. It's like people are walking around with blinders on. "Send a thousand dollars and we'll pray for you"? Fuck. I can pray for myself.

And, by the way, I believe that prayer works...

DR: In what way would you say that your art reflects your beliefs and your passions?

GDP: When I finally got to New York, I started to realize how much a lot of the work I did was therapeutic and a reflection of who I was and what I saw. I used to create a lot of things back in the day that were disfigured and looked like aliens and I realized that I was just trying to express that I was "in pain, dude". I have done a few pieces that are political. I did an emaciated Jesus, hung up by strings, that I called Jesus for President. I am starting to see that I can have passion for certain things and so the work I do now is starting to be more cerebral. I am more aware now of what I am doing.

DR: When you imagine your life and where you will eventually end up, what do you see?

I have people in my life that encourage me to "Keep at it. Just keep at it"...

DR: And why do you think they say that?

When I look at my shit I'm like "You really like this? Really"? And I feel so fortunate that they really do like it because it is all just my imagination and what I feel about what I've seen.

I honestly can't say I know where it's going but I hope that I continue along this path growing and working and creating larger pieces and understanding how colors work together and all of that because then I won't have to feel obligated to put this color with that color. If I went to school I am sure I wouldn't do half of the shit I do because "This color isn't supposed to go with that color". Or, "The heavier oils are supposed to go on top..."

In Tibet the monks, they create with sand and it's beautiful and then, two minutes later it's gone. Ya Know? It's like fuck it...

If I could just take a brush and create a painting in the air, I'd like that. Who knows? Maybe I'll open a studio one day for people who, like myself, don't really care about the cliques or who you know or this organization or that style -- No titles no nothing!

I just want to show my work so that people might enjoy it. I have had that opportunity to have people actually look at my work and want it. That is rewarding. Seeing people want to put your work up? That is a gift.

DR: What is it that you want right now that you don't have?

GDP: Well, I am looking for an apartment...

DR: And that is not a little thing...

DR: Between where and where?

GDP: Here in the United States and Holland. I have family in both places. It's always hard for me to go back and forth. I am just getting back from Holland yesterday and I was in tears all night last night.

I love New York. It has really given me a home. And, out of all of the other places I have lived in, it feels the most like Europe but, it still isn't home.

DR: That's a big thing to not have if you want it. Is there anything you have that you don't want?

GDP: Wow. Coming to New York, I knew that I was shy and timid but New York has sharpened me. I would like to lose my timidity and my doubts about doing certain things. I want to be more courageous and New York has done some of that for me.

It's amazing how opportunity comes to you when you aren't so bogged down. Opportunities are always there but we miss them because of our bullshit. I have friends who accuse me of being lucky and who think that things just come to me. And, I could take their lives and show them all the different places where they could have taken a chance but didn't.

DR: It does take a certain frame of mind to recognize opportunity and good fortune when you see it.

When people look at you, what do you want them to see?

GDP: I don't want to control that. I'd rather that people take me for who I am to them. If someone looks at me and sees an asshole, that's good. That's alright. I don't have an issue with that. But if somehow I have inspired someone or someone sees me as the possibility of being a great friend - that's good too. I don't want to be the judge. Same thing for my art.

I honestly don't consider myself an artist and it's so hard for me to say to people "I'm an artist"...

DR: What do you consider an artist then if its not you? Who would be an artist?

GDP: I think that is up to other people. Who am I to say "This is art". It's up to everybody who goes to see, to say.

DR: You can't claim if for yourself?

GDP: That would be like me claiming to myself that I am a fuckin' hero or something. Who am I to say that I am a hero? That is for everybody else who sees me do something that they consider to be heroic to declare. Superman wasn't flying around calling himself a hero while he was saving people.

DR: So then, we exist in the experience that other people have of us?

DR: We don't exist in the world according to how we see ourselves because we don't live on an island or in a vacuum. We live in relationship to others and so, who we are is dependant on how other people see us. I love that. Thank you.

GDP: Well you said it!

DR: No. You said it. I am just crystallizing it for myself.

A hundred years from now what do you want to be remembered for?

I want to be remembered as someone who chose my own path. 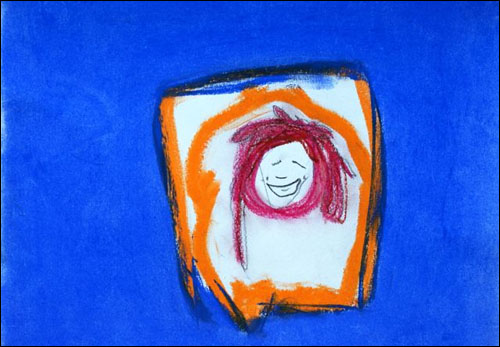