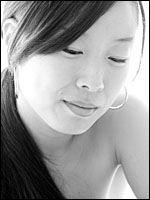 Ishle Park is a Korean American woman who is a world-traveling poet, singer, and the first woman to be named the Poet Laureate of Queens ~ the largest and most diverse borough in New York. Dubbed "the Queen of Queens" by her fans, the Borough President declared Park's birthday as "Ishle Yi Park" day in her hometown.

Park's first book, The Temperature of This Water, (Kaya Press, 1994), is the winner of three literary awards, including a Pen America Award for Outstanding Writers of Color and the Member's Choice Award of the Asian American Literary Awards. Her poetry has been published in literary magazines such as Ploughshares, Wasafiri, The Best American Poetry of 2003, and Century of the Tiger: One Hundred Years of Korean Culture in America.

Her poetry CD, Work is Love, includes tracks with Korean traditional drums, Spanish guitar, beatboxing, and music produced by Japan's critically acclaimed DJ Honda. Park has opened for artists such as KRS-One, Ben Harper, and Saul Williams, and has been featured at literary and music festivals, performing her unique blend of poetry and song at over three hundred venues around the world, including Cuba, Jamaica, Singapore, Korea, and New Zealand.

She is a regular on HBO's "Russell Simmons Presents: Def Poetry Jam" and was a touring cast member of the Tony-Award winning production of "Def Poetry Jam." Park is currently working on her first album.


Ishle Park is someone who understands what it is to be an inside outsider. As a Korean American woman, Ishle considers herself a bridge between worlds both in America and in Korea, where her parents fled during the Korean War. Her poetry, drawing from the pain of her parents and on the promise of tomorrow, is a beautiful expression of a young woman who already knows who she is, while she discovers who she can ultimately become.

DR: Tell me about your life and your work.

IP: I had rough childhood.

There was a lot of domestic violence. My parents fought a lot. It was painful and I escaped by reading books. I saw my mother do it. She read all day and she would take me to the library to check out books. I used that as my outlet -- just reading. I have loved words since I was a kid.

Then I started writing poetry.

In high school I became the editor of the school's literary magazine and I had a teacher who really inspired me. That teacher was the one that showed me that poetry was not reserved for dead white men in the "hallowed halls". She showed me that I too, could be meaningful and profound through words; that I could tell my own stories. Her name was Mrs. Rizzuto. She really lit a spark.

IP: Poetry has magic in it.

Plus, I have a short attention span. I am part of the younger generation where everything is three minutes long. I was part of the slam world and was competing for awhile and we were used to getting things in sound bites. I also feel that just creatively, I can sit down and have a magic moment by creating a poem that is beautiful and profound sometimes. I feel like poems say everything I need on a single page.

I read in a book, Burning Down the House, that at a party you can always tell the fiction writers from the poetry writers. The poetry people will spill the wine and party all night. The fiction people are the ones who will stand around and discuss things and stay late to clean up the mess.

You have to have such stamina and endurance to write novels -- plot and character and point of view. I am in the middle of writing one right now which is one of the hardest things that I have ever undertaken. It is really a challenge. Yeah, man.

Edith Wharton said that when you start a novel it's like taking a walk in the forest with your lover - it's very exciting and fun. In the middle of the novel it's like you are in the Gobi desert and then at the end there is an oasis.

I feel like I have been starving in the desert but I can see the oasis. 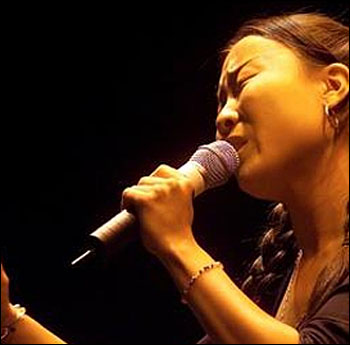 Her highway is a silver ribbon threaded
through a lush hair of trees. She gets lost in its curves,
its shushing becomes her nightmusic.
Sheĺs older now. She drives one-handed.
She knows these turns, seen them all before.
No longer a wet-lipped girl fidgeting
in livery cabs with Dominican drivers
who reek of Brut cologne and wink into the rearview.
She rides alone. Until sky breaks open. A greening light.
An empty highway she rides between dusk and dawn,
distance and time, watching the sun anoint treetops,
watching eyes of dull apartments catch aflame.
She drives, a silent witness with no name.
Every time, itĺs like being born again.

When my mother turned sixty, she kissed the invisible stars
on the foreheads of her two grown men and deemed them worthy stars

The sky, a vaulted blue dome, empties
itself and fills Pyongyang with quick, fluid stars

Tonight, longing fans out like a silk curtain
over an empty room; a girlĺs eyes burn like hungry stars

In Gum Gang San restaurant, Mr. Park croons ~
if I could reach into midnight with two hands and harvest all the stars...

When parents age like wine, they tuck away
desires and settle for accountant-sons (lesser stars)

Lying on a rice mat in South Korea
we witness the descent of three, long-tailed stars

Years ago, she put her breast in my mouth
and fed me stars; soon she will spill into a larger milk of stars

A red flag once burned a hole in my motherĺs youth ľ
its ashes now hold: a gold sickle, a hammer, a star

For more about Ishle Park and her poetry, visit http://www.ishle.com

DR: Describe your relationship to inspiration.

IP: I try to feed my soul with good food, good literature and good people.

I need to be around things that I can learn from. I like to read a lot and I feel like if I read good literature something will seep in. If I read a lot of rich and interesting books from diverse authors, it informs me. I learn about different worlds that way.

My family and the struggles that they have gone through have inspired me. My family survived the Korean War; a crazy war where everybody lost everything and one fourth of the population died or was orphaned. I feel like they are all carrying such a deep hurt and they don't know how to talk about it. It's been very interesting to grow up like that. I realize that my parents carry a lot of pain because America dropped bombs all over people's houses. My mother was orphaned and those six kids just had to raise themselves. My father remembers my aunt carrying him on her back and running because their house was being bombed. Coming to America and starting a whole new life was a very brave thing for them to do.

My parents lived through some crazy shit and I don't know if I could have done that. I feel privilege to come from those people.

I want to make my ancestors proud.

I want to work toward Korean unification so that my country can be whole again. Korea is suffering because North and South hate each other with a passion but they love each other with this intense familial bond. When they get together they are just human. I don't know how but in my lifetime - I am a dreamer - I want to work toward Korean unification.

DR: So you see Korean unification as a possibility within your lifetime?

DR: What is it that you think you do really well?

IP: I think that I act as a bridge between different worlds.

Maybe that is part of my mission as an artist. Russell Simmons was brave enough to take a chance on me, on a crazy Korean girl, for his latest tour. I was born and raised in Queens and I have friends who are Black nationalists and some of the strongest most amazing souls that I know. On the other side I have cousins who live in East St. Louis selling hair and I just feel like I know both sides of the "Korean Black" thing. I understand both sides and I hope my poems can speak to both sides and make people feel like

Out of all of the Asian cultures I feel like Koreans are the most passionately independent and soulful. We are so intense and heartfelt and we have such a long history of struggle. We are strong. I feel like we have that in common with Black folks.

DR: What is it that you think you can do better?

IP: I have a whole list of things that I think I could do better...

DR: Is there anything that you would change about yourself if you could?

I would be more considerate of other people's feelings at times. I would listen more, too. My job is performing and so I talk a lot. I think that I could gain so much more if I would just shut up and listen more.

DR: When people listen to you, what do you want them to hear or discover about you?

IP: I am a very pure and sincere soul. I try not to be mean to anybody. I feel like I have desires for the best and I try to work toward that every day of my life. I try to maintain the willpower to do what I do as a Korean American woman and an artist - to tell my story even if it airs the dirty laundry of my community sometimes.

I am just trying to be a good soul while I am here on this earth.

I just turned thirty and I feel like now, I am the person who I am going to become, for better or for worse. I see these parts of me that I want to change but I love myself. After all of these years of self hate, I finally love myself.

DR: Will you weave a poem for me, about who you are?

Sometimes beautiful woman who looks towards the heavens and wishes for the best, as I ask my ancestors for blessings light and love.

I want my life to be my most beautiful song.

DR: A hundred years from now what do you want to be remembered for?

IP: Hey, you know, if I could leave behind a few songs, a few poems and a few grand children that will make this world a better place, I'll be happy and grateful.

I just want to leave this world a small offering in gratitude for what the world has given me.