You are here: Living Louder | Inspiring People | Journalist and Executive Director of The Think Outside the Cell Foundation, Sheila Rule

Journalist and Executive Director of The Think Outside the Cell Foundation, Sheila Rule 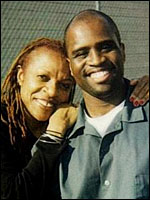 Sheila Rule is on a passionate mission to remove the stigma from people who have or are currently serving time in prison. Her efforts are fueled by the inspiration that exists behind prison walls and she works tirelessly to bring the humanity of the imprisoned to the world outside.


DR: Tell me about your work and your life:

SR: The best place to start is to talk about how I ended up doing this work.

About ten years ago, I happened to be at Riverside Church for what is known as Homecoming. Homecoming happens at the end of the summer when the minister comes back after being away and all of the various clubs and organizations put out their pamphlets and programs trying to entice people to join. I was there that day and stumbled upon the Prison Ministry and a woman at the table said “You need to get involved” and I shrugged and said “Okay”. Because so many people of color are behind bars I thought that maybe there was somebody that I could help.

I started going to the Prison Ministry meetings and they thought that because I am a writer and a journalist for The New York Times for about 31 years that I would be good at answering letters. So they asked me to respond to the letters that they had received from people who were incarcerated. That is what I started doing.

I was so moved by the skills and talent and beauty and inspiration behind prison walls that I wondered what more I could do.

DR: How long ago was that?

SR: That was ten years ago.

DR: And how long, once you decided to participate in the prison ministry, before it became something that you were deeply involved with.

SR: It was interesting because initially I would go to meetings and wait to volunteer but nobody had anything for me to do. Finally, after about four months, one of the leaders suggested that I respond to the letters.

Once I received the letters I was immediately into it. I got lots of letters and I had a lot of people writing to me back and forth, people that became pen pals. It was a lot of writing but it was also a joy.

So, to answer your question, as soon as I started getting these letters and really started experiencing close up their humanity, I was so moved and I thought that I had to do more.

DR: I was just about to ask you that. What was it about those letters that drew you in so that ten years later here you are?

SR: I do think it was the power of their beauty, their talent, and their skill and, at the end of the day, their humanity. I concluded:

Here are people who are labeled, who are demonized, who are despised, who are thought of as “Once a criminal always a criminal” so that their humanity is lost to the greater society.

That, to me, seemed tragic.

DR: I am always frustrated by the overall attitude that we have in this country about people who commit crimes. We detach ourselves from taking any responsibility for how people end up the way they end up. I think that an unwillingness to take responsibility makes it easier to ignore people in prison. We all ultimately bear some responsibility for our society and how well it works or doesn't work and for whether people feel valued enough to believe that they can make a meaningful contribution. That is why I have a problem with the death penalty and with life sentences with no possibility of parole. That, to me, is inhumane. I mean to rob people of the hope of redemption and a second chance is just not right.

SR: I agree 100 percent. We live in a society that is punitive. It's all about punishment and not about rehabilitation or restorative justice. People come out of prison and will be denied the right to vote, be denied housing, be denied a job. It is so unbelievably punitive. They are made to be second-class citizens for the rest of their lives. When you see what happens in other cultures you become astonished by what is happening in our own country. In other countries there is an attitude of responsibility, “We'll give this guy sixteen years because by then we should have been able to do something to rehabilitate him”. For this country it's more about warehousing...

DR: Which is a whole other thing. Sometimes I get lulled into believing that something is what it says it is as opposed to something that primarily exists for profit. There is incentive, in many instances, to disregard rehabilitation.

SR: The prison industry really supports lots of communities. It is big business.

So, beyond the letter writing, what else do you do...?

Purpose: To spark a thoughtful national conversation about issues that impact the incarcerated, the formerly incarcerated and their families—and to explore ideas and initiatives that address their needs and those of the greater society. Members of this huge population are largely forgotten, but if this nation doesn’t develop smart policies around their concerns, there will be a high price to pay. It is important that Americans grapple with these issues in well-considered ways. As they do, stigmas and societal barriers against this population can begin to fall away.

Agenda: The symposium will be a day-long event in the main sanctuary of the Riverside Church. It will be broken into three segments—one dealing with families and the human cost of mass incarceration, another dealing with reintegration/recidivism issues and a third that will explore policy initiatives and ideas. The policy segment is to be conducted in the style of a town hall meeting. The other two segments will be more along the lines of panel discussions, but the emphasis will be on having meaty conversations among the panelists. It is our aim to have each segment driven by solutions, rather than merely stating the problems. For all of the segments, we will carve out time for questions from the audience.

Major speeches will be delivered by four individuals:

Audience: We anticipate a range of attendees, from thought leaders and policymakers to social justice advocates and the formerly incarcerated and their families. We are encouraging the general public to attend.

Sponsors: The Ford Foundation gave a generous grant to the Think Outside the Cell Foundation, founded by Sheila Rule, to develop the symposium, which is being presented in partnership with the Fortune Society’s David Rothenberg Center for Public Policy, the College and Community Fellowship, the Manhattan Borough President’s Office and the Riverside Church Prison Ministry.

To learn more, visit Think Outside The Cell's website.

SR: Well that was just the beginning. I felt that I needed to do something more so I started a publishing company called Resilience, Multimedia and I decided that it could be a vehicle to tell real life stories about this population by this population - the incarcerated, the formerly incarcerated and the families - so that they get to tell the truth about their experiences. We have published four books.

The first book is Think Outside the Cell: An Entrepreneur's Guide for the Incarcerated and Formerly Incarcerated. That book was written by Joe Robinson who, at some point, wrote to the prison ministry. I wrote back. We developed a terrific friendship. We fell in love and we got married.

DR: Okay so you can't...sorry but I can't just step on over that. Wow. That is incredible. How long ago was hat?

SR: We met nine years ago through our letters and we got married about six and a half years ago.

DR: And is he still in prison?

SR: He is still incarcerated.

DR: What are his prospects for being released?

DR: What was his crime?

SR: Murder. He was upstate and he was involved in drug dealing...

SR: He was 21 years old. He got into an altercation with another drug dealer, wrestled the guy's gun from him and shot him in the process.

So, the parole board recommended that he be released but the governor didn't release him that year...

DR: What was the parole boards rationale for recommending his release?

DR: What is that like for you to be separated from someone you love under these circumstances?

SR: It's very hard but what keeps us going is that we really are clear that we have a lot of work to do in terms of these issues. We really are a team.

So that the symposium that we are hosting on September 24th with people like Reverend Al Sharpton, Mayor Cory Booker, Michelle Alexander who wrote The New Jim Crow, Khalil Gibran Muhammad, the new director of The Schomburg – that idea came to us at the visiting room at Sullivan.

DR: Tell me about the symposium on September 24th.

DR: And by these issues you mean, what?

SR: These are issues that effect the incarcerated, the formerly incarcerated and their families, everything from re-entry, re-integration, family ties, family support, collateral damages, the barriers they face when they come home...there is an array of issues that these men and women and families face everyday.

DR: Is it fair to characterize the symposium as...

SR: It's about having a greater understanding and appreciation of the gifts of these men and women and of their needs. But it's also about understanding their humanity and about ending the stigma.

We want to raise the conversation and talk about these issues at the symposium. It promises to be a great event. We want to spark a thoughtful conversation.

DR: You know it bugs me that our criminal “justice” system clearly targets Black men. Police comb Black communities when looking to arrest. The overwhelming expectation of Black men and boys is that they will end up in prison. I want us, at the level of society, to take responsibility for that.

DR: My nephew is 26 years old and lives in Houston, Texas. I am so uncomfortable with him living there just because he is Black and because Texas has the death penalty and has a track record for executing innocent men.

What is your overall hope for what people will take away from the Symposium?

SR: I want the people in that room to begin to work toward effective change and to realize that there needs to be a change and that together we have the power to do it.

DR: A hundred Years from now what do you want to be remembered for?

SR: Having a giving heart.

Donate - Think Outside the Cell Foundation

WE NEED YOUR SUPPORT!

The Think Outside the Cell Foundation is on a mission to break down the barriers that block the incarcerated, the formerly incarcerated and their families from full citizenship and the American Dream.

By contributing to Think Outside the Cell, you will help to: