A 1981 UVa graduate where she was a four-year starter for the women's basketball team and a two-time Academic All-American, Val earned a degree in political and social thought. She has been a member of the USA Basketball Board of Directors since 1990 and she was the driving force behind the creation of the historic 1995-96 USA Basketball Women's Senior National Team program that culminated with a perfect 60-0 record and the gold medal at the 1996 Atlanta Olympics.

She played professional basketball in France before graduating from UCLA School of Law in 1985, and she worked for two years as an associate at the New York law firm of Simpson Thacher & Bartlett.

She and her husband, Charlie Rappaport, have two daughters, Emily and Sally.

DR: Val, will you share with my readers what you do for a living?

VA: You could identify me as the founding president of the WNBA where I served from the League's start which was in 1997 -- the first season -- until February of this year, 2005. And now I am currently the president of USA Basketball, which is the United States Basketball Federation and that organization oversees the national teams that represent the US in international competition, including the Olympics. And -

DR: ...most important. What is one of the things that you give credit to, for your success?

VA: Well, I would say, Dana, as I look back over my career -- my professional career -- I would say the things that have helped me more than anything, in terms of my path, were two things:

I have always recognized that in order to be, at least a professional success, you simply need to work hard. I subscribe to the maxim that no matter how hard you work, there will always be some people, if not many people, who will work harder than you will - no matter how hard you work. But none-the-less, I don't believe that you can really get very far in either professional or personal endeavors unless you are willing to make sacrifices and pay the price and put in the effort. So, that is something that I have always believed in.

And then secondly, I would say that I think in order to, not only be successful but also to be happy, you need to take care of your relationships with people. It's probably the most important thing that we have -- our connections with each other. And you know, you don't always have to be the smartest person, but if you can get along with people in a certain way, and as I said earlier - if you put in the effort, then chances are you can make a lot out of whatever it is you've been given.

DR: That's great, Val, and just knowing you, I know that maintaining great relationships is central to who you are and...

VA: And I know that you are the same way and I think that if you understand that relationships matter and that sometimes - the shortest encounter with someone can be life altering. Recognizing that, I think is part of the key to understanding life.

DR: Absolutely. Val, when you mentioned earlier that you are a mother, you mentioned that with emphasis. That's another thing that I know about you, you are a great Mom. Aside from the fact that you have a demanding, successful career, you are a great Mom. What can you offer to people who might be struggling with the demands of work and parenthood or might be considering an endeavor where they have concerns about being pulled in multiple directions?

VA: Well, I think everyone has to find their own formula. I would say the hardest thing that I have done in the last ten years has been -- not just parenting or not just working but trying to do them together; trying to figure out a way to try to do both and to feel good about the job I'm doing at both. And, I don't believe there is a secret formula that is right for everyone. I do believe that a lot of little things have to come together to allow you to do both of those things in a way that you think is doing it well and they include

DR: So tell me then, what is one thing that you really love about your life?

VA: I would say, I love that I have a family that is a very supportive one and a very connected one. That includes Charlie and the girls of course. But I have a younger brother that I am very close with. I lost my Dad but my Mom is still around. And they live not too far away. Charlie's mom is with us. I have a very strong sense of family and family traditions and rituals and family get togethers…and I would say that's probably pretty much the most important thing that I have in my life. I think secondly, the variety of life that is available to so many people, including me - the ability to have traveled and to have seen other cultures and cities, to have been part of a profession that I like. Sports is an exciting profession and I have a great passion for it.

DR: Tell me about one of the most exciting places that you have visited.

VA: Well I have been fortunate to have traveled the last several Olympics for example. And, Australia was fabulous! Sydney was a beautiful place. I was in Athens for the 2004 Olympics. That was fascinating because of the mix there of contemporary and ancient …you could be on a fashionable shopping street and turn the corner and you'd encounter a 3,000 year old ruin; a pretty unique setting.

I had a chance to travel to Argentina this summer and see a bit of South America and get a glimpse of their culture. So you know, those have all been great places. And then there have been the other places where the sheer physical beauty, you know, you have the Grand Canyon and wonder how that - Wow. Gosh. What an amazing sight. What a beauty; beautiful thing of nature. That has also been incredibly memorable.

DR: Share with me one thing that, for you, must occur in your lifetime so that when you have an opportunity to look back at everything, you will consider that you have lived a life of no regrets.

VA: Well... Dana, one is, back to family. I think that you, as a Mom, can probably understand this better than anybody. I think we want our kids to be -- we want to feel like we are raising them in a way so that when they are our age (laughs) they will be as well adjusted as possible and happy and successful, however they define success and to have relationships that are solid and supportive for them. So I think first and foremost, I want to be able to look back and (have had that). That desire has certainly shaped my professional decisions in the last year.

DR: It would be a missed opportunity if I didn't ask you to comment on something.

People are always dealing with, and will always be dealing with some form of "I don't want to" or "I don't feel like it". You mentioned earlier that part of what you attribute your success to is hard work. Sometimes people get discouraged because they "don't feel like it". Do you ever wrestle with that, and if you do, what has you go forward anyway?

VA: Well, I wrestle with it all of the time Dana, because I am often asked to do things, whether it's go to a meeting or come to a dinner - and these are mostly work related things, over the years…To make a trip -- and sometimes you are asked many months in advance, and I have sometimes agreed to things and then when that date shows up I end up saying, "Gee, that was a good idea at the time". And you find yourself wrestling with "How can I get out of this?" or "Should I still go?" And one, I think if you make a commitment to something, you should go. That to me is very basic. If that is your reputation and your integrity at stake…And two, someone once told me that 90% of life is just showing up and I subscribe to that too because, I do believe that if you do make an effort to be with people whether it is in a personal or professional setting, chances are that something good can come out of that.

I have rarely gone to something that I was hesitant to do, where there hasn't been some silver lining. Maybe a person that you developed a relationship with, or a new person who became a new friend or was able to help you, or have a mutually beneficial relationship with in another way; you learned something, you got a new experience in another area…so I think it's just a matter of trying to look at the positive that could come out of an invitation you've been given or something that you could undertake and accept that, chances are pretty good that if you make the effort to give it a try, something good might happen.

DR: Yes. And I too am clear that 90% is just showing up and almost always if you go in with a great attitude something great will happen.

A hundred years from now, what do you want to be remembered for?

VA: To the extent that I have been able to be part of some exciting things in women's sports, I hope that those good things continue and I hope that a hundred years from now people look back and recognize the efforts of the many people that have been involved in that -- sort of that odyssey (laughs) if you will; The Women's Sports Odyssey. That includes me.

I would hope that my children's children's children will look back upon their ancestry with pride, the way I do. My mother's mother was an immigrant from Eastern Europe and I didn't know her really well. She passed away when I was about 12. She didn't speak much English so it was very hard for me to even communicate with her. But I greatly respect the decision she made to leave her country; leave a life of poverty to come to the United States to make a better life for herself. She came by herself. She was only a young teenager and had that not happened, God knows where I would have been.

And so, while I didn't know her that well, I greatly respect this amazing woman who made an important life decision that changed the lives of her family to come. And I am trying to communicate to the girls, that heritage, so that they can be proud of it. I hope that in turn they will pass that on to their own kids so that when they grow up they get a better feeling for who they are and what their ancestry is.

DR: And so what do you want to be remembered for?

VA: So, I would hope that my kid's kid's remember me as a strong woman and a woman who tried to help women move forward in a particular type of way, and mostly --

one who cared so much about the family.

If that can happen that is all I can hope for. 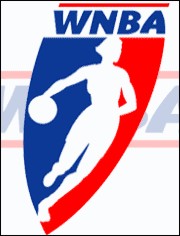 On April 24, 1996, women’s basketball announced “We Got Next” as the NBA Board of Governors approved the concept of a Women’s National Basketball Association (WNBA) to begin play in June 1997.

Women’s basketball has come a long way since its beginnings in 1892 when Senda Berenson adapted James Naismith’s basketball rules for women. And with the continued growth of the WNBA, the sport is sure to go even further. For more information on the WNBA, its history, players and game schedules...